Ignite is a blockchain to help launch Cosmos SDK-based blockchains.

Using Cosmos SDK and Ignite CLI, developers can quickly create a crypto application that is decentralized, economical for usage, and scalable. The Cosmos SDK framework allows developers to create sovereign application-specific blockchains that become part of the wider Cosmos ecosystem. Blockchains created with Cosmos SDK use a Proof-of-Stake (PoS) consensus protocol that requires validators to secure the chain.

Even though tools like Ignite CLI simplify the development of a Cosmos SDK blockchain, launching a new chain is a highly complex process. One of the major challenges of developing and launching your own sovereign blockchain is ensuring the security of the underlying consensus. Since Cosmos SDK chains are based on the PoS consensus, each blockchain requires initial coin allocations and validators before they can be launched, which presents developers with significant challenges, such as determining their chain's tokenomics or coordinating a robust validator set.

The initial coin allocations and validators are described in a JSON-formatted genesis file that is shared among all initial nodes in the network. This genesis file defines the initial state of the application. Based on PoS, secure chains require the initial allocation of coins to be well distributed so that no single validator holds more than 1/3 of all tokens and receives a disproportionate amount of voting power.

Along with ensuring the security of the underlying consensus, another highly difficult task in launching a new blockchain is attracting a diverse set of validators for the genesis file. Many promising projects fail to capture the attention of a sufficient number of trustworthy validators to secure their chains due to a lack of resources or experience.

The Ignite Chain has, therefore, been conceived to facilitate the launch of Cosmos SDK blockchains by helping developers to navigate the complexities of launching a blockchain and coordinate the genesis of a new chain. Using the decentralized nature of blockchain, Ignite's coordination features help blockchain builders connect with validators and investors, speeding up the time to market of their projects and chances of success.

Commands to interact with Ignite Chain are integrated into Ignite CLI and allow launching chains from it. Integration with Ignite Chain allows the CLI to support the developer in the entire lifecycle of realizing a Cosmos project, from the development and experimentation of the blockchain to the launch of its mainnet.

What is Ignite Chain​

Ignite Chain is a secure platform that simplifies the launch of Cosmos SDK-based chains, lending vital resources and support at the coordination, preparation, and launch stages. Ignite provides the tools that blockchain projects need to overcome the complexities of launching their chain, from validator coordination and token issuance to fundraising and community building.

Ignite facilitates the launch of new chains with an overall launch process during three phases:

To reduce friction at each phase, Ignite provides an immutable and universal database for validator coordination.

In the future, Ignite will also offer:

To launch a chain in the Cosmos ecosystem, the validators must start nodes that connect to each other to create the new blockchain network. A node must be started from a file called the genesis file. The genesis file must be identical on all validator nodes before the new chain can be started.

The JSON-formatted genesis file contains information on the initial state of the chain, including coin allocations, the list of validators, various parameters for the chain like the maximum number of validators actively signing blocks, and the specific launch time. Because each validator has the same genesis file, the blockchain network starts automatically when the genesis time is reached.

Ignite as a coordination source of truth​

Ignite Chain acts as a source of truth for new chains to coordinate a validator set and for validators to generate the genesis for a chain launch. The blockchain doesn’t directly store the final genesis file in its own ledger but rather stores information that allows generating the genesis file in a deterministic manner.

If any element of the launch information is censored, for example, removing an account balance, the launched chain reputation is negatively impacted and implies that the majority of validators agree on not using:

Launch information can be created or updated in three different ways:

The initial genesis structure can be:

The coordination process starts immediately after the chain is created and ends when the coordinator triggers the launch of the chain.

The launch information is updated during the coordination process.

During the coordination process, any entity can send requests to the network. A request is an object whose content specifies updates to the launch information.

The chain coordinator approves or rejects the requests:

The request creator can also directly reject or cancel the request.

Each chain contains a request pool that contains all requests. Each request has a status:

Approving or rejecting a request is irreversible. The only possible status transitions are:

To revert the effect on launch information from a request, a user must send the eventual opposite request (example: AddAccount → RemoveAccount). 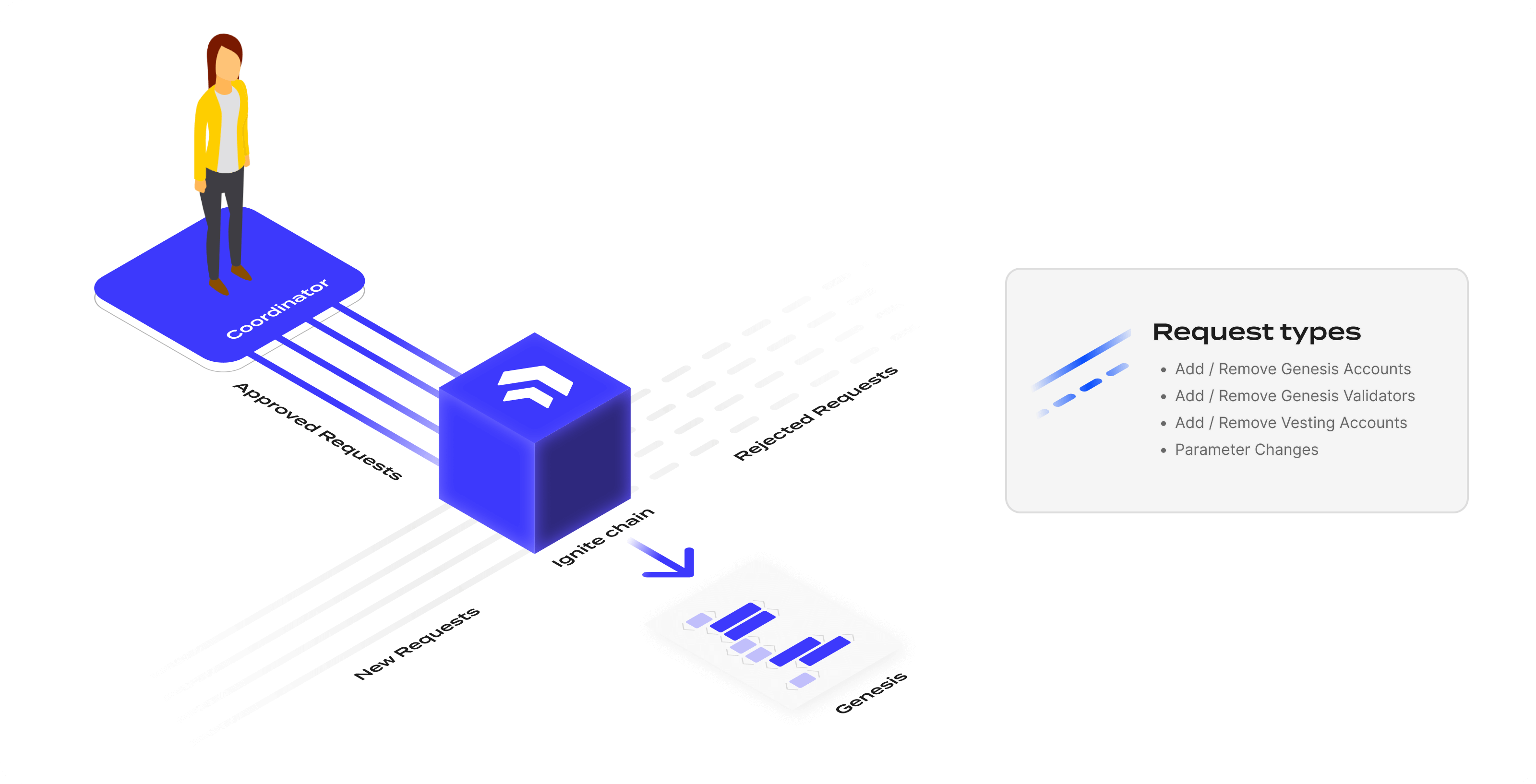 Six types of requests can be sent to the Ignite chain:

AddGenesisAccount requests a new account for the chain genesis with a coin balance. This request content is composed of two fields:

The request automatically fails to be applied if a genesis account or a vesting account with an identical address is already specified in the launch information.

AddVestingAccount requests a new account for the chain genesis with a coin balance and vesting options. This request content is composed of two fields:

The request automatically fails to be applied if a genesis account or a vesting account with an identical address is already specified in the launch information.

Self-delegation during genesis initialization is performed with a Cosmos SDK module named genutils. In the genesis, the genutils module contains objects called gentx that represent transactions that were executed before the network launch. To be a validator when the network starts, a future validator must provide a gentx that contains the transaction for the self-delegation from their account.

The request automatically fails to be applied if a validator with the same address already exists in the launch information.

Some checks are verified on-chain when applying a request. For example, a genesis account can’t be added twice. However, some other validity properties can’t be checked on-chain. For example, because a gentx is represented through a generic byte array in the blockchain, an on-chain check is not possible to verify that the gentx is correctly signed or that the provided consensus public key that is stored on-chain corresponds to the consensus public key in the gentx. This gentx verification is the responsibility of the client interacting with the blockchain to ensure the requests have a valid format and allow for the start of the chain. Some validity checks are specified in the genesis generation algorithm.

The overall launch process of a chain through Ignite is composed of three phases:

Once the launch is triggered and before the launch time is reached, the chain launch process enters the preparation phase. During the preparation phase, requests can no longer be sent and the launch information of the chain is finalized. The validators run the genesis generation algorithm to get the final genesis of the chain and prepare their node. The remaining time must provide enough time for the validators to prepare their nodes. This launch time is set by the coordinator, although a specific range for the remaining time is imposed.

Once the launch time is reached, the chain network is started and the chain launch process enters the launch phase. At this point, since the chain is live, no further action is required from the coordinator. However, under some circumstances, the chain might have failed to start. For example, a chain does not start if every validator in the genesis does not start their node.

To ensure determinism, genesis generation rules must be rigorously specified depending on the launch information of the chain.

The general steps for the genesis generation are: